Our colleagues at UBIWorks engaged the Canadian Centre for Economic Analysis to study the potential economic benefits of a basic income. They produced a detailed analysis of the potential short- and long-term economic impacts of two basic income programs in terms of GPD, jobs, and government revenues, highlighting how drawing on households, businesses, and government debt to varying degrees shapes these outcomes.

Please visit the Grow the Economy section of the UBIWorks website for a short video, infographics, highlights and the full report.

Special Committee on Poverty in PEI

The Special Committee on Poverty in PEI consulted with individuals, community groups, government
officials and subject-matter experts to develop recommendations on measures of poverty, a living
wage and a basic income guarantee. It was presented to the Prince Edward Island Legislature on 27 November 2020 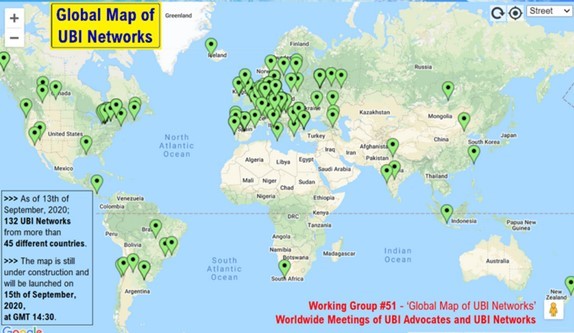 A new tool for communication, interaction and collaboration among Universal Basic Income (UBI) Advocates and UBI Networks was launched on the 15th September as part of the 13th International Basic Income Week.

Click here to find a BI group on the map.

Brazil’s program is the largest and one of the oldest Basic Income programs in the world. As of March 2020, the program covers 13.8 million families, and pays an average of $34 per month, in a country where the minimum wage is $190 per month. The reaction from multilateral institutions to Bolsa Família has generally been enthusiastic.