Basic Income Could Slow the Wealth Transfer to the Rich 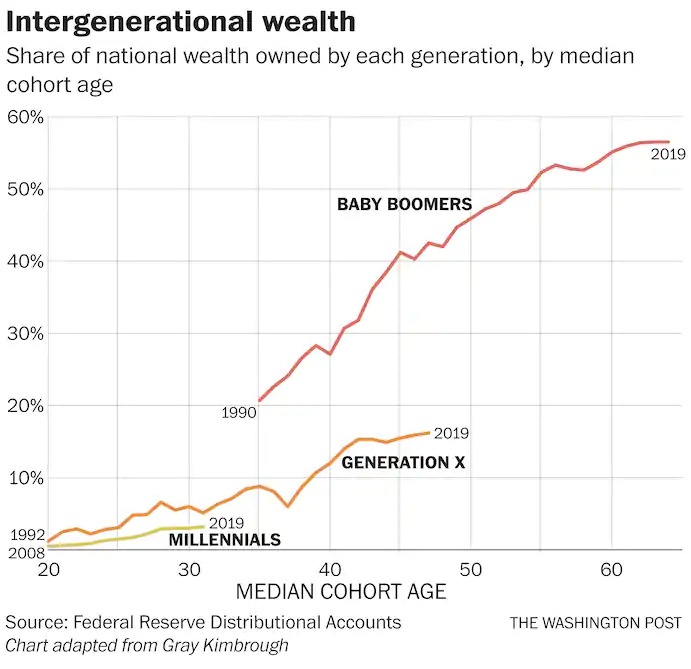 You see on the graph three lines, all trending to the top and to the right. On the left-hand side is a percentage of total societal wealth owned. On the bottom axis is the median age of each of the three cohorts. The lines are thus the wealth accumulated by each cohort at each specific age.

The Yellow line is on the bottom and if for Millennials. It is short since present-day Millenials are still in their early 30s. It is underneath the Millenials line at approximately half of the wealth attainment.

This is taken from a Washington Post article which you can read here.

Basic Income Could Have Been Cheaper than CERB

The Parliamentary Budget Officer looked at the cost of a six-month basic income and found that it would be cheaper than the first four months of CERB. It also would have served more Canadians experiencing financial hardship. Equally important,  the stress of not knowing if and when payments would stop would not be present.

Basic Income Could Have Been Cheaper than CERB: Watchdog 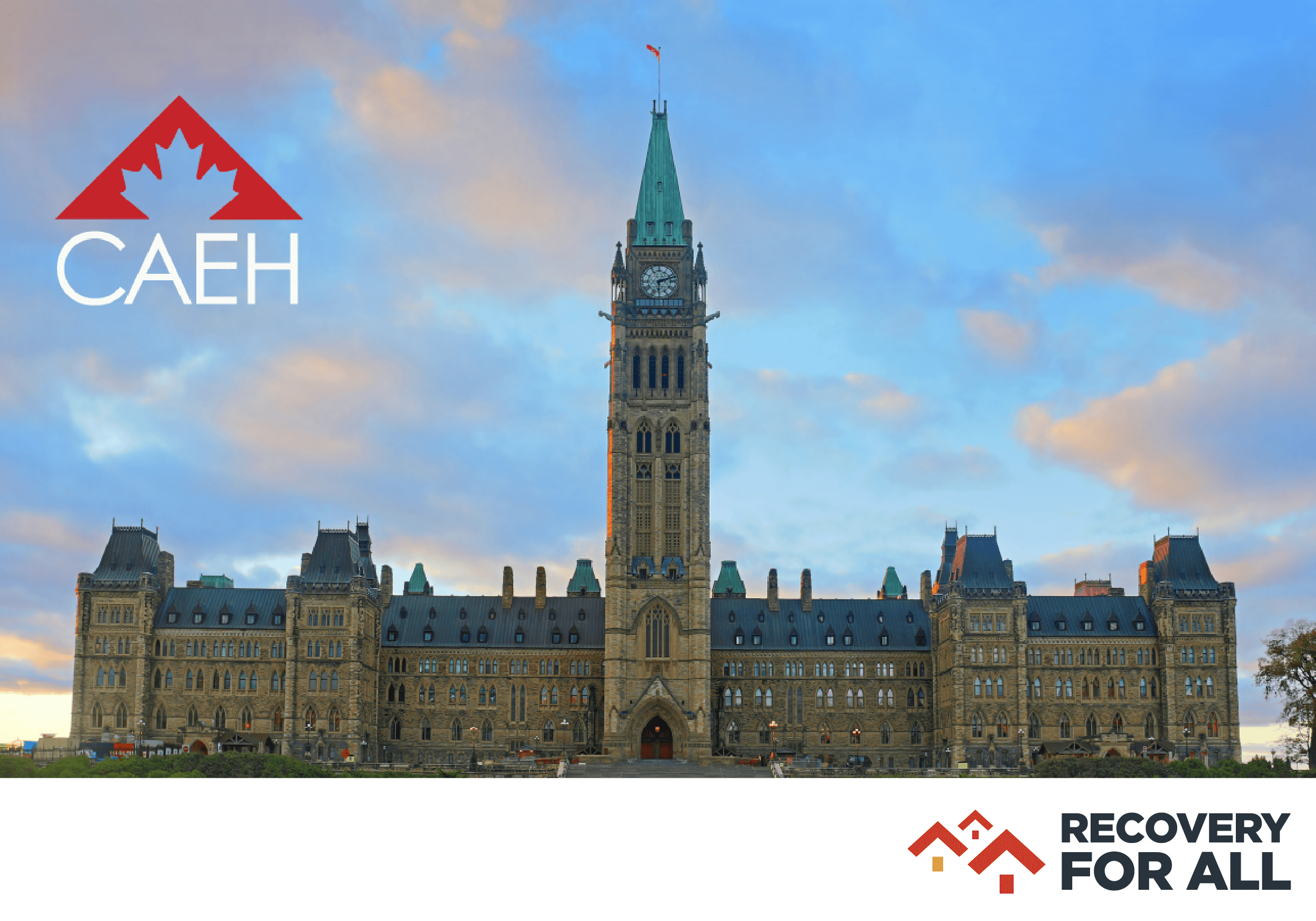 In Canada, people experiencing homelessness are uniquely vulnerable to COVID-19 as a result of compromised health, crowded living conditions, poor hygiene and a lack of access to health care. As of today, there have been more COVID-19 positive cases in Toronto’s emergency shelter system than in all of the provinces of Manitoba and New Brunswick combined.

We know how to end homelessness once and for all, all it takes is the political will.

WITH YOUR HELP, WE CAN DO THIS. PLEASE FILL IN THE FORM NOW TO SEND YOUR LETTER OF SUPPORT.

Learn more about the Canadian Alliance to End Homelessness and the Recovery For All campaign.

Canadians Have a Ravenous Appetite for Action on Inequality – Will the Government Feed It?

Senators Lankin, McCallum and Pate hosted a meeting with Indigenous women leaders and MP Leah Gazan to discuss the impact of COVID-19 on Indigenous women in Manitoba and the place of guaranteed livable basic income in redressing systemic racism and inequality.

“We heard so many examples of the ways in which the pandemic has amplified food and income insecurity, the tragedy of horrendous mortality rates, child removal, homelessness and massive incarceration in Winnipeg that are so clearly tied to income level. We also heard the hopefulness of Indigenous women who foresee the links between the development and co-management of social services and guaranteed livable income so that they can afford food, clothing, housing, sending children to recreation programs or on field trips. The women were very clear,” identified Senator Frances Lankin. “For healthy communities, we need healthy families, including sufficient resources, especially money and time, to spend time with children, volunteer in their classes and the community.”

“We listened carefully to the experiences. Poor people are subject to such harmful stereotypes that characterize them as having ‘budgeting problems’ and GLI as a handout. We also heard the links between economic insecurity, sexual exploitation and other human rights violations. For those on social assistance, most were not able to get CERB. If they were, they are now ending up being cut off from social assistance and so they’ve lost the minimal support they had previously. It was awful to hear about women being or feeling pressured to take both because they wanted to provide for their kids,” continued Senator Mary Jane McCallum.

“I was especially struck by the discussion about the costs of being poor. The women reminded us of the research on how many hours it takes to be poor; the reality is that it takes all day to be poor – at least 12 to 14 hours per day to access services and systems that are supposed to be supporting people,” added Senator Kim Pate. “We heard ample evidence of the ways a guaranteed livable income could relieve economic, health, social and psychological stress and provide people, especially women, the chance to look forward and plan ahead. We heard the urgent calls for action and committed to work with our Senate and Commons colleagues to advance guaranteed livable income and achieve the changes so desperately needed by and for so many.”

"Human Again": The (Unrealized) Promise of Basic Income in Ontario

This article compares social assistance in Ontario with a pilot project to test basic income as an alternative method of enabling economic security and social participation. Interviews conducted with pilot recipients indicated a desire to be financially independent, but that the conditionality of traditional programs had negative repercussions including work disincentives and bureaucratic hurdles. Respondents reported that basic income improved their nutrition, health, housing stability, and social connections; and better facilitated long-term financial planning.

The Canadian Alliance to End Homelessness Campaign - Recovery for All

The Canadian Alliance to End Homelessness is a national movement of individuals, organizations and communities working together to end homelessness in Canada.

"Alleviating poverty is key to preventing homelessness. A national guaranteed minimum income will ensure those in greatest need have minimum financial resources to help them meet their basic needs and prevent homelessness when times are tough."

By joining this grassroots movement, you are helping to end homelessness in Canada once and for all. We have a plan. It is affordable. It will create jobs. And it will work.

*** Read the Six Point Plan to End Homelessness in Canada and sign up to support the movement here.

The Horrors of Social Assistance in Ontario

The mental stress experienced by almost all recipients.

The high level of administration and complexity of rules

COVID-19 realities have exposed deep gaps and shortfalls in our social structures. Prior to the pandemic several provincial governments had made targeted austerity cuts, and some continue to make cuts (largely unnoticed) during this crisis.

A future post-pandemic reality situated in austerity measures is a terrifying thought. We know what has happened in the past and we must join to fight for a better future for the majority of Canadians. It is time for the left, for lack of a better term, to take united and organized action to ensure this doesn’t happen.

We are calling this movement Basic Income Plus and it includes the following 5 focuses for us to start working together.

The 5 issues included here work in tandem for the collective good. There should be something on this list that everyone can get behind and start organizing. While divided we barely get noticed, fighting together for these broad brushstrokes will work toward the kind of nation we all want to live in. We’ll push for the right implementation and the right details as we get closer to seeing results. For now, we need to demand policy shifts and get political will to move swiftly toward these ideals.

On Sept. 19, 2020, 36 cities across Canada have already signed up to march for basic income sponsored by the 100 CEOs in favour of a basic income. We believe that by marching united for Basic Income Plus we will provide an umbrella in which unions, community service organizations, and concerned citizens can unite to make sufficient noise to be heard – not only about basic income, but these additional progressive issues, too.

If you want to find out if your city or town is already signed up, contact Tracey at [email protected] UBI Works will provide masks, sanitizers and material to all organizers. If you are in Kawartha Lakes, Kingston, Hamilton or Toronto, then organizing for the march has already started.

If you are interested in discussing this further, then contact Joli Scheidler-Benns at [email protected] For more information click this link: https://lindsayadvocate.ca/basic-income-plus/ . You can also follow along on Facebook here: https://www.facebook.com/BasicIncomePlus/ . We are non-partisan and don't represent a political agenda. Rather we are concerned citizens who want to have a better future and more equitable Canada. I look forward to talking further about this soon!

*** Watch Joli in conversation with the hosts of BI Community Chat here.

The Cost of Poverty in Toronto - November 2016 Report

"This paper is a conservative analysis of the cost of poverty in 2016 in Canada’s largest city. Today’s costs have climbed considerably due to the rapid increase in the cost of accommodation. Poverty costs us all. This report estimates the cost of inaction. It estimates how much more we may be spending simply because poverty exists.

Estimations of the cost of poverty in other cities can be approximated by using 2.7% of GDP for whatever catchment is being used.

We all pay taxes, even when we are poor. As income increases, so do the share of taxes paid. However, we forget the power that paying taxes has on people and communities and we can change for the better the social and economic conditions for others."

John Stapleton is one of the foremost experts on poverty in Canada. A Metcalf Innovation Fellow since 2006, The Cost of Poverty in Toronto report (November 2016) is the result of six months of collaborative work.

John worked for the Ontario Government for 28 years in the areas of Social Assistance Policy and Operations and was Research Director for the Task Force in five anti-poverty groups. He sits on federal Minister Duclos’ Advisory Committee on Poverty Reduction, the Minister of Community and Social Services Advisory Group on Social Assistance Reform and Toronto’s Advisory Group on Poverty Reduction.